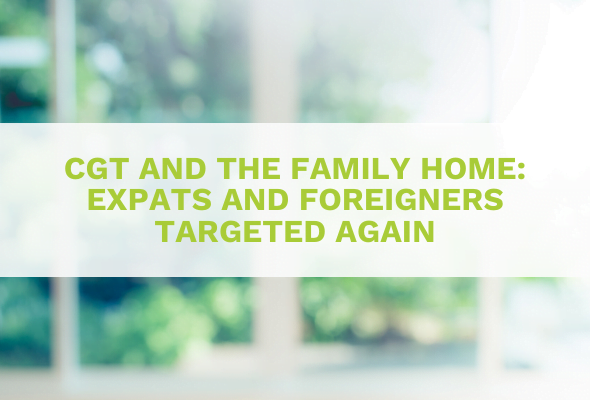 The Government has resurrected its plan to remove access to the main residence exemption for non-residents – a move that will impact on expats and foreign residents.

Back in the 2017-18 Federal Budget, the Government announced that it would remove the ability for non-resident taxpayers to claim the main residence exemption. The unpopular measures were introduced into Parliament but stymied. An election later, a recomposition of Parliament, and the Government has again introduced the reforms but in a modified form.

The proposed changes would apply from the original Budget announcement on 9 May 2017, so could impact on properties that have already been sold. However, a transitional rule would allow capital gains tax (CGT) events happening up to 30 June 2020 to be dealt with under the existing rules as long as the property was held continuously from before 9 May 2017 until the CGT event.

That is, if you held a property from 9 May 2017 up until the sale date, the existing rules might continue to apply.

If the measures pass Parliament, a non-resident taxpayer would be prevented from applying the main residence exemption to the sale of a property, regardless of whether they were a resident of Australia for some or most of the ownership period.

For expats, there is a proposed exception to the new rules for situations where the individual has been a non-resident for 6 years or less and a specific life event occurred during the period of foreign residency. “Life events” refer to terminal medical conditions suffered by the individual or certain family members, the death of certain family members or a marriage or de facto relationship breakdown. That is, if you were working overseas for 5 years and your spouse died during this time, the exemption could still potentially apply to your former Australian main residence.

For non-resident individuals, there will be a significant flow-on impact if the legislation passes Parliament as:

· They will miss out on a full or partial exemption under the main residence rules.

· They will generally be taxed at non-resident rates (i.e., no or only partial tax-free threshold).

· The CGT discount percentage could be less than 50%.

· The cost base reset rules that sometimes apply to provide an uplift in the cost base of the property to its market value at the time it is first rented out, are unlikely to apply, and

· The foreign resident withholding rules could impact on the cash flow position of the vendor.

The main residence exemption is currently available to individuals who are residents, non-residents, and temporary residents for tax purposes. Treasury Laws Amendment (Reducing Pressure on Housing Affordability Measures) Bill 2019 is currently before the House of Representatives and is not yet law.

While you should plan for change, do not act specifically on these impending changes until they have passed Parliament.

If you are concerned about how these impending changes may impact you, let’s talk.